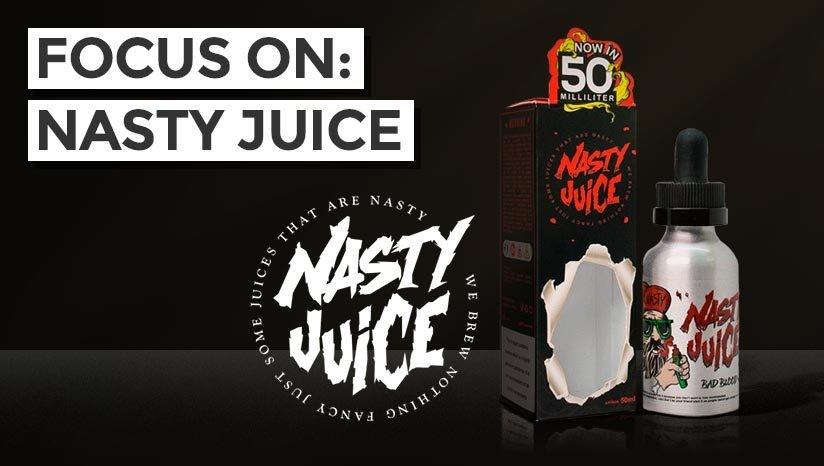 They’re fruity, funky, and have satisfied vapers around the world: they are Nasty Juice e-liquids, made in Malaysia.

Nasty Juice was set up in July of 2014, and officially launched to an eager Malaysian public in December of that year. They quickly became the most popular brand of e-liquid in Malaysia, and have since made waves selling their products internationally.

Research on flavour combinations, investment in high-tech manufacturing process and an eye for what appeals to the public helps make Nasty Juice leaders in their field.

Something else that sets Nasty Juice e-liquids apart from their competitors is their sharp design. From the get-go they made sure that their packaging and branding was as cool as their flavours, and it’s helped them stand out.

It starts with a funky box, with bright and bold colours and their distinctive illustration of a bearded man vaping on the front. Inside vapers find a sleek and sturdy aluminium bottle (also featuring the Nasty bearded man!) with a secure cap and dropper. By using a glossy aluminium container for their e-liquids, Nasty Juice ensure that the quality and taste is perfectly preserved.

The global popularity of Nasty Juice e-liquids mean that they have been a target for fakers who make substandard e-liquid and package it in fake Nasty Juice boxes, then try to sell it on as if it’s the real thing. If you’re buying from a reputable supplier then you won’t suffer this problem, but Nasty Juice wanted to make especially sure that nobody would pick up a bad e-liquid and think it was theirs. They figured out a clever way to let vapers know when they’re buying the real thing rather than a counterfeit – every box now has a little QR sticker with a hologram and batch number on the top!

The bestselling Nasty Juice e-liquids come in a range of tasty flavours.

For instance, there’s the Wicked Haze E-Liquid, which mixes fresh blackcurrant with tangy lemonade for a refreshing everyday vape. The fruity and sweet A$AP Grape E-Liquid combines black grape, ripe berries and other fruits for a tasty hit of grape juice.

The Bad Blood E-Liquid is teeming with the flavours of freshly picked blackcurrants and cool mint, and is made for an all-day vape. The delicious Slow Blow E-Liquid mixes tropical pineapple with bittersweet lime soda, leaving vapers with the smooth, fresh taste of summer.

As an organisation clued up to what the public are looking for in their vaping experience, Nasty Juice have announced a few new features for the e-liquids they are releasing.

Some of the Nasty Juice e-liquids will be special ‘low mint’ flavours, giving a cool taste. Some will have ‘no menthol’, for people who have a refined vaping palette and don’t enjoy a menthol hit. Others will be special ‘double fruity’ e-liquids, with extra flavour sensations to savour.

To start this off, Nasty Juice have just launched a new ‘yummy fruity’ series of e-liquids, which are all low mint products. This range currently includes three awesome flavours of e-liquids, each package in a nifty, colourful tin. There’s the sweet but tangy ‘Green Ape’ flavour, the tasty and aromatic mango flavoured ‘Cush Man,’ and beautifully sweet, strawberry flavoured ‘Trap Queen.’

With their love of innovation and constant desire to make quality, tasty e-liquids, you can bet that the next range of e-liquid which comes from Nasty Juice will be amazing for vapers.