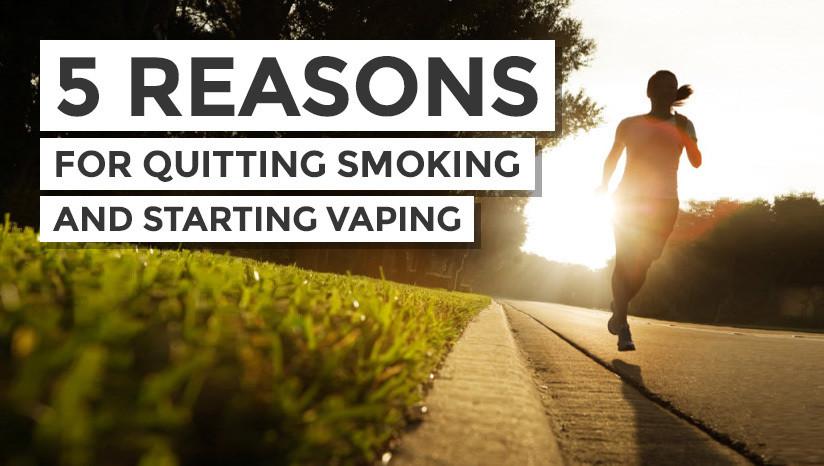 5 reasons to make the switch to e-cigarettes

Thinking about switching to e-cigarettes? Here are the top five benefits of quitting smoking and starting vaping.

From saving money to health benefits and no longer needing to carry a lighter, here are 5 reasons to make the switch to e-cigarettes.

Let’s start with the most important reason of all – smoking could kill you. About half of all regular smokers will die due to their addiction to cigarettes, as smoking related diseases are the biggest killer in the UK. Smoking causes over a quarter of all deaths from cancer, a third of respiratory deaths, and a seventh of cardiovascular related deaths. As well as preventable death, smoking is linked to disease and ill health, it costs the NHS billions of pounds a year, and lit cigarettes are responsible for fires and burns.

Another downside of smoking tobacco is that it damages the health of those around you, and the smell can bother people, too. As it's been banned in many public spaces like pubs, restaurants and clubs for almost a decade, smokers have to take their habit outside when they want to satisfy nicotine cravings.

Vaping is not associated with any of the risks to bystanders that secondhand smoke is. The vapour generated by e-cigarettes contains only tiny particles, which have already been exhaled by the smoker and are at incredibly low levels, posing no identifiable risk to others. Vape side effects are negligible and often boil down to finding the right e-liquid and nicotine strength to suit, making a switch from tobacco to vaping a no-brainer.

3. You will save money

A packet of cigarettes can easily cost you upwards of £9, which means many smokers spend an astonishing £300+ a month on their habit. That figure only is set to rise with increases to taxes and political penalties.

E-cigarettes on the other hand are a far cheaper alternative to smoking. Instead of buying a packet of cigarettes a day, people who vape can purchase an e-cigarette starter kit for as little as £19.99, a few 10ml bottles of e-liquid flavours for £5 each, and get going. Plus on average a 10ml bottle of e-liquid can last between a week or two of regular vaping. On reflection £5 a week versus £9 a day and it's clear that vaping is the winner here.

Let's be honest, there aren't many people who like the smell of tobacco clinging to their clothes or lingering in the air.

Unlike cigarettes, vape pens have very little odour - sometimes vape clouds can just smell a little sweet! If you use e-cigarettes you'll also be rewarded with a huge range of flavours to enjoy in the form of your e-liquids.

5. You'll never have to search for a lighter again!

Imagine a world where you don't put your hand in your pocket or rummage in your bag for five minutes only to discover that you forgot to bring a lighter or matches. No more leaving lighters lying around, buying yet another one from the shop, or having to ask strangers for a light.

E-cigs come with a built-in coill and battery, which warm the e-juice and allow you to vape hassle free.