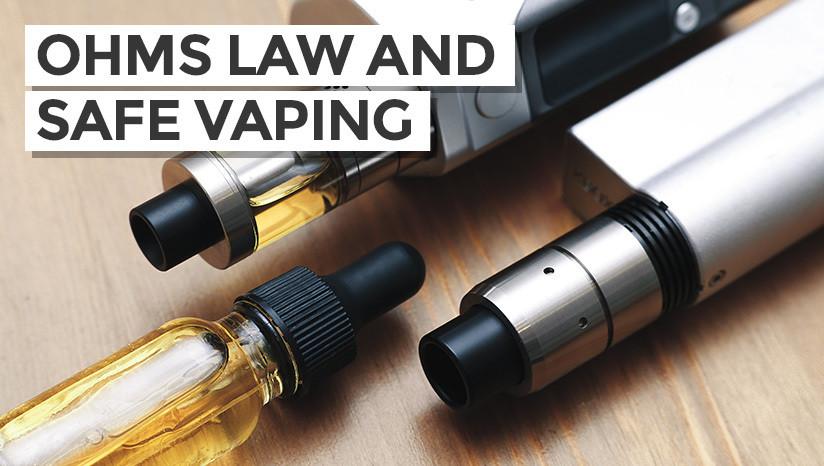 With new laws and regulations coming into effect from May 2017, safe vaping has never been more crucial.

With media attention around exploding devices, it’s paramount that those using a vaping device do so in the right way. But how do we know if we’re pushing our vaping devices too far? Ohm's Law, named after the German physicist Georg Ohm, whose treatise published in 1827, will ensure that you’re in the know when it comes to vaping safely and within the limits of your apparatus.

Any device that can be adjusted (current, voltage, and coil resistance) should be done so while keeping Ohm's Law in mind, and it’s vital that those who vape with sub-ohm mods (where resistance is taken to less than 1.0ohm; for example 0.25ohm) adhere to these guidelines to ensure safe vaping. So what is Ohms Law?

So what is Ohm's Law?

Ohm's Law is used to determine the current, voltage and resistance in a simple circuit, and a vaping device, when boiled down to it's simplest form factor, is a simple circuit in itself.

The formula for Ohm's Law is I=V/R

In short, your device has an electric current running through it that will vary depending on the settings being used and/or the power out of your device. This current is measured in amps (A) and is equal to its voltage in Volts (V) divided by the resistance – R – in Ohms (Ω).

Sub-ohm vaping involves vaping with a total resistance of less than one ohm, and the amount of resistance in your circuit will determine the power output you’ll get from your device. Ultimately, the lower the resistance of the coils used, the higher the amperage being drawn from the batteries - which equates to high output.

I’ve been vaping for a while with no issues. Why is it so important to know this now?

If you’re an advanced vaper, or new to vaping entirely, and want to know is vaping safe, it’s important to know that vaping at a resistance that exceeds the safe level of power output of your battery can be detrimental to your safety when vaping. This isn't as such a risk when using a regulated mod (these devices have built in measures to ensure it can only be operated safely and, most but not all, are fitted with a small display), as they are designed to not fire when the resistance of the coil being used is below what is often a standard 0.10ohms. However, vapers using an unregulated mechanical mod should take care and make every effort not to strain their batteries by vaping dangerously low resistances. Mechanical mods are far more advanced and should only be used by advanced vapers that fully understand the implications of Ohm's Law and coil building.

Should you wish to build your own coils for your RBA (Rebuildable Atomizer), we’d advise investing in a reliable Ohm's meter to ensure you get an accurate reading of your coil's resistance - although slightly pricey, we would recommend the Coil Master 521 Tab, or Geekvape 521 Tab. After all, you’re sending high levels of voltage through a device and putting it next to your face; you want to know that you’re not putting yourself at risk. When a battery is pushed beyond its safe limit, it can vent hot chemicals which can leak under very high pressure and rupture through your device and explode!

We would also strongly recommend familiarising yourself with an Ohms Law Calculator which is a great resource on how to plan and build your own coils.

Be safe and be in the know. Happy vaping!