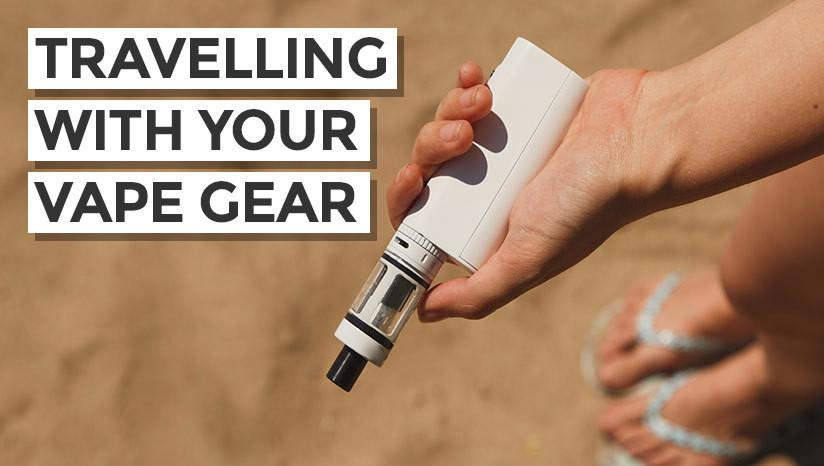 Travelling With your Vape Gear

If you are a vaper and have a summer holiday planned, you’ll need to think about more than just what colour swimwear to pack. If you want to know if you can take e cigs in hand luggage, this blog will take a look at things you need to know if you are going to be travelling with your vape gear.

Vaping is not allowed at any of the UK’s airports. For a short time, Heathrow had a vaping area in one of their terminals, but that’s now gone.

Can you take e cigs in hand luggage?

Vape gear should generally be taken as carry-on luggage, for security and your own peace of mind.

Batteries must be taken as carry-on luggage – don’t pack them into your case to be put in the hold. This is the most important thing to remember, as no big batteries of any kind are supposed to be packed in hold luggage anymore.

Mods, RDAs, and tanks can sometimes be put in hold luggage, but it’s a good idea to take them as carry-on as most airlines insist on this and it’s better safe than sorry. It will also mean it’s less likely for there to be any breakage, as you can take extra care with your own carry-on bag. Just make sure your vape kit is well protected for travel in a vape kit carry case, and that the battery pack has been removed.

E-liquids are best packed in your hold luggage, as you can take a decent supply this way. We recommend that you avoid taking e-liquids in glass bottles if you can, as these could break, and you should make sure your e-liquids are well wrapped up and even sealed in a plastic bag too, in case of spillage when they are in transit. If you decide to take e-liquids in your carry-on luggage, remember that there are already strict rules in place for liquids going through security. You’ll need to make sure that your e-liquid fits into the small plastic bag you’re required to use to transport all your carry-on liquids, and that e-liquid bottles don’t exceed 100ml in size.

Can you take vapes on a plane?

Unfortunately, vaping is generally not allowed on flights, and you shouldn’t expect to be able to vape while you’re in the air. No UK airline permits the use of e-cigarettes on their planes, and it’s actually illegal in some airspaces so you could face huge fines or penalties. As tempting as it might feel to sneak a vape in the toilet, don’t even try, and don’t follow the advice of people on forums suggesting that it’s something you can get away with! If you really need a nicotine hit while you’re traveling, take another safe and flight-friendly method with you.

Confusingly, some airlines like British Airways and Ryanair occasionally sell e-cigarettes on planes, but you’re still not allowed to use them in-flight.how much vape liquid can you take on a plane

How much vape liquid can you take on a plane?

This differs from airline to airline, but the average quantity of e-liquid you can take on a plane can be 100mls and clearly displayed in a clear container.

Frustratingly, you may find that even when your vaping kit is allowed in the airport and on your plane, it’s not allowed at your destination. Vaping is not a universal activity, and misconceptions mean it can be regarded as unusual, strange, or even be illegal in some parts of the world.

In most parts of Europe, it’s fine to use and carry vaping kits in designated public spaces, although a few places only allow nicotine free vaping.

Norway has banned e-cigarettes, as has United Arab Emirates, Brazil, Singapore, Argentina, and Uruguay. In Canada e-cigarettes are theoretically illegal to sell but are actually widely available, to make matters even more confusing!

If in doubt when traveling with a vape , make sure you look up the e-cigarette regulations for your destination before you travel with vape gear, and confirm the airline and airport policy, just in case.