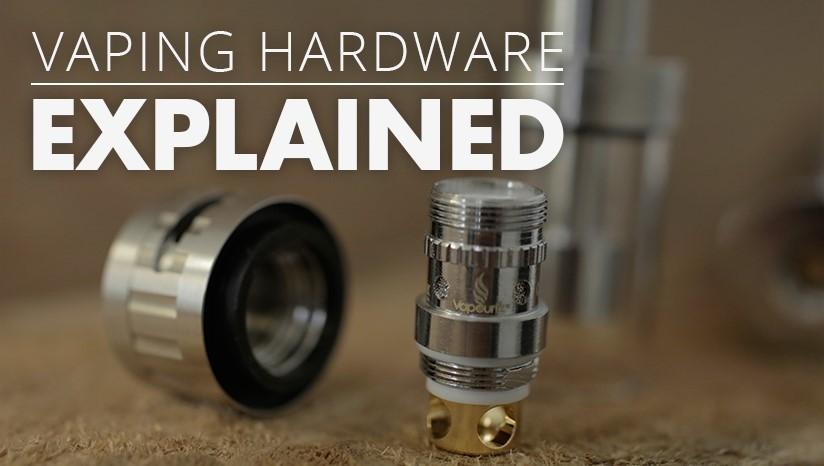 Understanding the general components of a vapour device will help you make the right choice when it comes time to buy or upgrade your kit.

When you’re just starting out, understanding the jargon can be confusing at times – here are the essential components and what they do.

The battery is what powers the device and makes it possible to turn the e-liquid into a vapour for vaping. While it’s one of the most straightforward aspects of an e-cigarette, there’s still a fair amount of choice when it comes to batteries. Some devices come with an internal battery that’s non-replaceable; that means if the battery stops working you’ll need to repair or replace the device. Another option is replaceable batteries; these can still be recharged a number of times, but can also be replaced or changed to help extend the life of your device. Box mods also offer the opportunity to give your device a power boost by making it possible to use two or even three batteries at a time.

The tank is heat resistant and houses the coil and wick, as well as a reservoir to hold e-liquid. There are several different tank styles to choose from, each performing essentially the same function with some key differences. The following are the most common types:

The coil is a small piece of resistance wire in the shape of a coil spring that’s used as a heating element to produce a vapour from the e-liquid. They come in both single coil and dual coil formats – dual coals have two heating elements, while single coils only have one. The wire is wrapped around the wicking material (or in the case of a self built or pre-made coils, the wick is fed through the middle of the coil) and connected to the power source.

Wick is the absorbent material – typically cotton, twisted silica cord or stainless steel mesh – that carries liquid to the coil. The wick delivers e-liquid from the tank to the coil where it is heated and turned into a vapour so it can be inhaled. Without sucking on the device, liquid can’t be absorbed by the wick. So with that in mind, it's important to follow the instructions, that come with your vapour device, to prime it before its first use.

E-liquid provides the all important flavour and liquid to make smoking possible. The solution is a combination of propylene glycol (PG), vegetable glycerine (VG), flavourings and nicotine and can come in a variety of different strengths and ratios – for example more VG or no nicotine. Most users who are already smokers start using nicotine e-liquids and gradually reduce the amount they use over time or even eliminate it altogether.