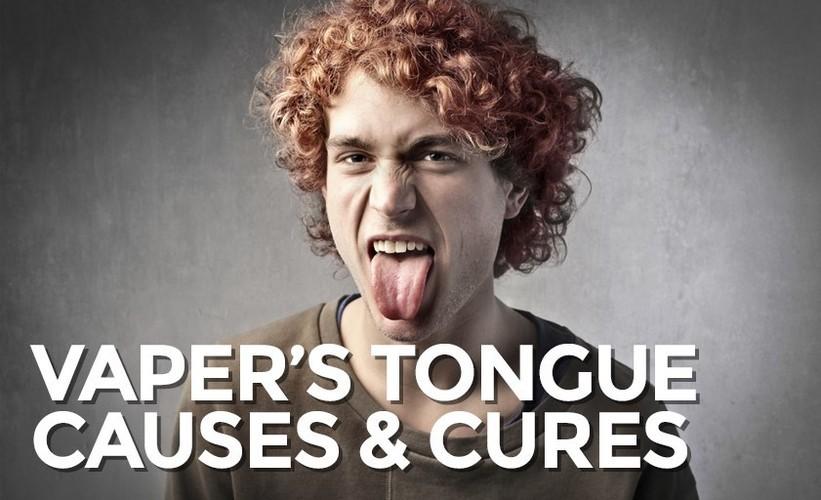 The Causes & Cures For Vaper’s Tongue

If you’re suffering from vaper’s tongue, find out about the causes and cures right here!

If you’re experiencing a numb tongue and lack of flavour from your daily vape then it’s very likely that you’re suffering from vaper’s tongue! The symptoms are easy to read and can include weaker flavour or no flavour whatsoever from your favourite e-liquid. You needn’t worry too much if you’re experiencing any of these symptoms because vaper’s tongue is not permanent and there are many ways to cure it!

Vaper’s tongue can be caused by a few different factors, sometimes combined or working on their own. These factors are more than likely caused by the act of vaping but there’s no reason to hang up your favourite mod because it will eventually pass and vaper’s tongue can often be nipped in the bud or prevented entirely. We’ll discuss how later in this article.

Daily Vape Overkill. Believe it or not, the reason that you’re struggling to taste the flavour from your favourite e-liquid could be because you’ve simply been vaping too much of it. By using the same e-liquid day after day, the chances are your taste buds are simply growing too familiar with the flavour.

This could be a great opportunity to switch things up and find yourself a new favourite flavour for your daily vape, but there’s no need to prepare yourself for an emotional goodbye to your current favourite. Simply switching to another flavour such as menthol or something citrusy with acidic properties for a couple of days should reset your taste buds and your favourite e-juice should taste as fresh and exciting as the day you first discovered it!

Steeped E-liquid. If you’ve left your e-liquid sitting for a while, whether in a bottle or in a tank, it’s highly likely that the juice has steeped. Ensuring your bottles are firmly sealed and being careful not to leave your liquid sitting in an unused device for too long will ensure your e-liquid maintains its flavour. You can check you’re storing your liquid correctly with our handy guide.

Baked Taste Buds. Vaping at a higher temperature may well produce greater flavour, but if you’re firing your coils at a temperature that’s burning your taste buds then eventually you’ll struggle to taste anything at all. Lowering the temperature of your device will allow your burnt taste buds to recover and when the flavour returns you can start testing different temperatures for optimum flavour!

Dirty Atomizer Contacts. Keeping your device clean is very important and dirty contacts on your atomizer can be a common reason for a lack of taste when you vape. It could be that you’re not really suffering from vaper’s tongue at all but just need to disassemble your device and give it all a good clean. A simple rub with a piece of kitchen towel should do the trick, otherwise it might be time for a replacement atomizer or clearomizer.

Smoking Cigarettes. Damaged senses of taste and smell are a common side effect of smoking, so if you’re a dual user, meaning you both smoke and vape, then it could be the cigarettes that are causing the numbed taste associated with vaper’s tongue.

Dehydration. A lessened sense of taste is often attributed to dehydration. Dehydration is easy to identify through various other telltale signs such as a dry mouth, fatigue, headaches and dark urine.

Illnesses & Medicines. Although vaper’s tongue is just a temporary effect of vaping, it could also be the symptom of a cold, flu, other illness or even a medicine that you’re taking. If you’re suffering from a cold, a similar illness or taking a prescribed medicine, just be patient – your sense of taste should return when the illness passes. Just think about how glorious that first vape is going to taste when the flavour returns.

Switch Up Your Juices. The chances are you’ve just become too accustomed to the taste of your favourite e-liquid. Switching to a new liquid, or finding a temporary replacement that tastes noticeably different to your favourite, and vaping on that for a few days will make your favourite daily vape taste fresh and full when you return to it.

Menthol E-Liquid. One of the most commonly suggested cures for vaper’s tongue is menthol flavoured e-liquid. The fresh taste from a hit of menthol will certainly leave your mouth feeling cleansed and this seems an effective way to ‘reset’ your taste buds too.

Flavourless E-Liquid. Not a fan of menthol? Vaping flavourless liquid is a good way to continue vaping while regaining your sense of taste! Use it for a couple of days and you should be able to return to your daily vape with reinvigorated taste buds!

Sniff Coffee Beans or Suck Lemons. These may sound like dismissive insults but they’re actually widely recognised methods for curing vaper’s tongue! Demonstrated by professional wine tasters and perfume testers as well as many vapers, these methods are known for resetting the taste buds quickly and effectively.

Stay Hydrated! It really could be that simple. If you don’t keep yourself hydrated your sense of taste will diminish. Keep sipping water, fruit juice or any soft beverage and you might find that your taste returns!

Drink Carbonated Water. Carbonated water, sparkling water, soda water… Whatever you like to call it, this stuff will rehydrate you and cleanse your palette quickly with its fizzy properties.

Use a Tongue Scraper. This method is nowhere near as torturous as it sounds. Tongue scrapers are available from most high street pharmacies and they work by gently scraping away odor-generating tissue that could be acting as a blocker that stops the taste of your vape as well as food and drink from reaching your palette.