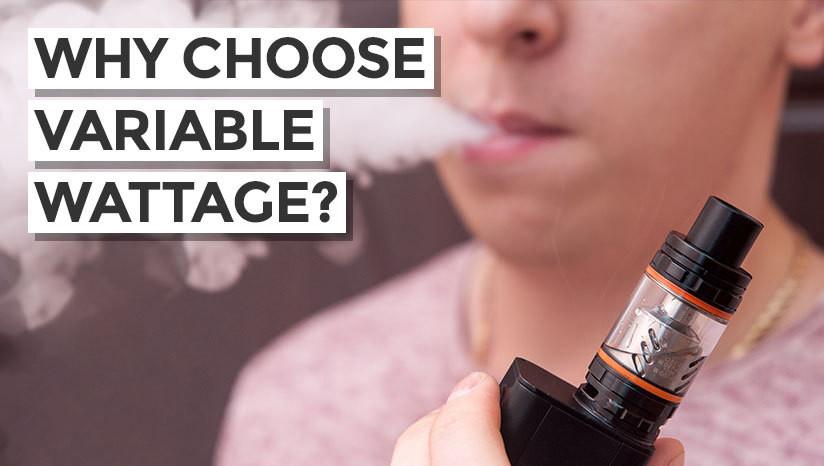 E-cigarettes can come with a variety of different wattages, and it can be confusing to know which one to buy. If you’ve ever wondered what the wattage means or why a variable wattage mod might be for you, read on.

What’s the wattage for?

As well as voltage, wattage is affected by the coil resistance. Low ohm coils use more watts, and produce more vapour, heat and flavour than high ohm coils.

Old e-cigarettes had limited batteries and their wattage was generally low. The first real change came in 2010 with the Evolv Darwin, which was the first variable wattage device on the market and went up to a (then amazing) 12.7w. While the Darwin was retired in 2012, it and its successors had paved the way for bigger and better wattages.

Since 2012 there has been a push towards high wattage mods, with many on the market now going far beyond what we thought would be possible. Take the IJOY Maxo Quad Box Mod, for instance, which has an output power of between 5-315 watts, and long-lasting battery capabilities.

Low watt e-cigarettes were great for new vapers, and still are, as well as being a solid choice for people who just like a simple, everyday vape. They are easy and safe to use, provide a great balance of flavour and throat hit, and the batteries don’t have to work too hard.

However, if you really want to push at what your e-cigarette can do, you need to go higher wattage. This is particularly the case for sub-ohm vapers and cloud chasers, as they need more power behind their vape.

High wattage e-cigarettes come with immensely powerful batteries to help give vapers the power that they need. The batteries need regularly charged for vapers who use their e-cigarette to the maximum wattage output, but they pack a real punch. As high wattage vaping gets more popular, the capabilities of batteries are getting better, too.

For instance, the Eleaf iStick QC 200W Vape Mod comes with a fantastic wattage range of 1-200 watts, with battery enhancing innovations like a built-in 5000mAh battery, cell balancing trickle charge system, and 1.5A quick charge capability if you use the Avatar Quick Charger.

However, lots of everyday vapers are now seeing the attraction in high watt e-cigarettes too. This is because of those immense batteries - if you vape on a low wattage with one of these highly capable kits, you’ll get battery power to last you well beyond a normal e-cigarette.

What is variable wattage?

Mods which come with variable wattage are great as they mean you can control the output power of your e-cigarette, meaning that you’ll be able to control the flavour and vapour production. Essentially, you tell the e-cigarette how much wattage you want to output, and it uses the battery to produce the power going into the mod.

They’re a good way of being able to use an e-cigarette for cloud chasing (high wattage) and everyday vaping (low wattage).

Advanced vapers might want to try the Smok T-Priv 220 Vape Mod, which not only has a variable wattage range of 1-220 watts, but also has a high battery capability, temperature control, and stunning OLED touch screen for full control over settings.

For vapers who want to get a bit more oomph from their e-cigarette or try a box mod for the first time, a mod with a narrower wattage range could be the way to get started. The sleek Innokin Cool Fire 4 Box Mod has a powerful 2000mAh battery, variable wattage range of 6-40 watts, and range of safety features like five second cut-off, short circuit protection, over-discharge protection, and battery level indicator.

As you can see, whether you’re a cloud chaser or someone who wants to get the most from their battery for their everyday vape, variable wattage mods are for you.